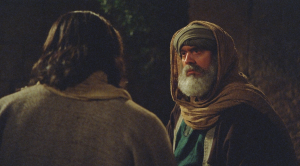 Nicodemus Moved by the Holy Spirit
By Xuming Sun

This year’s Easter season, I learned about a Biblical person, Nicodemus, through Pastor’s teaching and our children’s lovely performances.
On the second Lent Sunday, our gospel reading revealed this well-known quote from Jesus –
• For God loved the world so much that he gave his one and only Son, so that everyone who believes in him will not perish but have eternal life.
These words were delivered to a single audience, a Pharisee, called Nicodemus, who belonged to Jesus’s challengers’ club and visited Jesus that night. I was thrilled at the moment. Why is this Pharisee different? What drove him to approach Jesus in an isolated way on a lonely night? How did Jesus greet this Pharisee that night? Is Nicodemus going to follow Jesus or just collect more evidence of thought crime? I soon forgot about following up on my questions until Trinity’s Good Friday service. Sitting in the parish hall suddenly I heard in the gospel reading that it was Nicodemus who brought a mixture of myrrh and aloes and helped to take down Jesus’ body from the cross. Isn’t this the perfect answer to all my questions?! Nicodemus indeed loved Jesus. He did not give up and leave Jesus and I am quite sure that he was a solitary man as he reached the blood-shed cross to help those weeping women bury Jesus.
Nicodemus also appeared in the Gospel when he spoke inside his group, among Pharisees, on a slow search to truth (John 7:50). Nicodemus said-
• Does our law judge any man, before it hear him, and know what he does?
On this past Easter Sunday night, when all the Trinity activities were completed for the 2017 Easter season, I was in bed and listened to Radio Vanticana (broadcasted in Chinese). A sermon given by Pope Francis said (English translation are from website) –
“Why then are we here to recall the death of a man who lived 2,000 years ago? The reason is that this death has changed forever the very face of death and given it a new meaning… …The cross is the living proclamation that the final victory does not belong to the one who triumphs over others but to the one who triumphs over self; not to the one who causes suffering but to the one who is suffering……It is the definitive and irreversible ‘no’ of God to violence, injustice, hate, lies—to all that we call ‘evil,’ and at the same it is equally the irreversible ‘yes’ to love, truth, and goodness. ‘No’ to sin, ‘yes’ to the sinner. It is what Jesus practiced all His life and that He now definitively consecrates with His death.”
Nicodemus was a perfect vessel to reveal Jesus’s Way, Truth and Life. May I myself also be a vessel to be used by the Holy God to deliver HIS will.