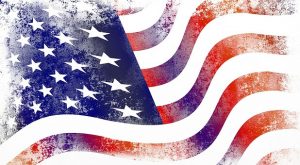 GOD BLESS AMERICA.  It’s not in our hymnal – I don’t know whether it’s in any hymnal – but it wouldn’t surprise me if this famous song found a place in the worship many congregations in America, last week or this.   It wasn’t written to be sung in church – it was actually created as the grand finale for an army camp musical called “Yip, Yip, Yaphank” – but I dare say that it speaks a prayer that is on many hearts today.  Certainly it is on mine. God bless America. (Amen!)

My interest in it was prompted by an article in Tuesday’s TIMES: GOD BLESS AMERICA is 100 years old this year.   Reading the story of its creator changed the way I will hear it from now on.

GOD BLESS AMERICA was written by a refugee, a Russian Jew fleeing religious persecution with his parents and five brothers and sisters.  A criminal gang in their small Siberian town had burned their house to the ground. The family arrived in New York in 1893; literally in the shadow of the Statue of Liberty, seeking asylum in the United States. Five-year-old Israel Beilin and his siblings were separated from their parents while their case was heard; had they come today they would undoubtedly have been detained and deported.  But, as they believed, God was with them: asylum was soon granted and they were released to begin a new life in the new country they would come to love, on the Lower East Side of Manhattan.

It was 25 years later, in 1918, that this young refugee, by then a soldier known as Irving Berlin, wrote GOD BLESS AMERICA for a fund-raiser at his army base on Long Island.  “Yip, Yip, Yaphank” didn’t make it to Broadway, however, and it wasn’t until the song was picked up by Kate Smith in 1938 that it took off, instantly becoming something of an unofficial national anthem in the roll up to World War II.

It wasn’t just another song among the 1300 or so that he wrote in his long career; Irving Berlin truly and deeply loved America.  As his daughter later wrote: “[America] was the land he loved.  It was his home sweet home.  He, the immigrant who had made good, was saying, thank you.”  As his way of saying thank you, Berlin donated all of the royalties for GOD BLESS AMERICA to the Boy Scouts and the Girl Scouts, earning them millions of dollars over the years.

God bless America.  This prayer of a Siberian Jewish boy fleeing gang violence with his parents and five brothers and sisters in 1893 has been uttered by millions of other immigrants and refugees and asylum seekers over the last four centuries.  In one form or another, “God bless America” was surely on the lips of the Pilgrims at Plymouth Rock escaping bitter religious persecution in England. Undoubtedly it was in the hearts by my own ancestors, fleeing starvation in an Ireland ravaged by potato famine in the 1840s.   I expect the sentiment is expressed in many languages today from the thousands of families driven to our shores by senseless wars in places like Syria and Yemen, and tragic social decay in countries such as Guatemala and El Salvador. I dare say that, in one form or another, “God bless America” was the prayer of someone at some point in all of our families; we are a nation of immigrants, exiles, refugees.  Some of you sitting here this morning are yourselves immigrants; some of you were refugees.  At some point, America welcomed all of us. I would claim that precisely this legacy of welcome and opportunity and freedom is what made and still makes America great.  The actual name of that statue in the harbor that we call Liberty, inscribed on its base, is “Mother of Exiles.”

Of course, not everyone who ever crossed the threshold of America did so with a prayer of thanks.  On the whole, our ancestors treated native Americans very badly. Between 1525 and 1863, some twelve and a half million Africans were imported to America as cargo.  Probably they were not giving thanks as they were led off the boat in shackles. Their descendants number some forty million today. As we certainly recognize now, the history of African people here is drenched in grotesque shame and cruelty; given that history it would not surprise me if the prayer of that Siberian Jewish refugee child were to stick in the throats of Black Americans.  Certainly there have been times when it has done so.

And yet I think it is fair to say that by and large Black people steadily have claimed their rightful place in America, and called on God to bless us all and unite us across the lines of tribe and race and nation that still divide and damage our world.  GOD BLESS AMERICA was sung proudly by African-American school children protesting segregation in Mississippi and Louisiana fifty years ago. It was heard at Dr. King’s 1963 march on Detroit. God bless America is not just a prayer of thanks by those who are newly arrived and welcomed, but also by those who still are seeking a full welcome into the blessings of America.   America is a work in progress, and that is a good thing, something we can be proud of on our national day. And we Christians are reminded that the expansion of God’s welcome and the sharing of God’s blessings is first and foremost the work of God’s church, work that is in our hands today.

When we sing the song in a few minutes, we will be asking God’s blessing on a glorious and still unfinished project.   At the heart of the song is this prayer: “…stand beside her and guide her through the night with the light from above.”   Christians know about that light from above: Jesus said, ”I am the light of the world. Whoever follows me will not walk in darkness, but will have the light of life.”   (John 8:12) In that light of life the differences among us no longer cast the shadows of division: as Paul explains, (Galatians 3:28) there is no longer Jew or Greek, male or female, slave or free.  Just as this is so for us in Christ, so it is in America: the differences among us are no longer divisions: we are no longer merely Siberians and Germans and Irish and Filipinos and Congolese. Before God and before our law there are no Ls, Gs, Ts, Bs, or Qs, no Black or White or Brown.  The light that shines out of the gospel, like the light of the lamp lifted beside that golden door in New York harbor, erases divisions and transforms our differences into blessings to be shared, not barricades to be defended.

Deriving directly from this biblical teaching is the great axiom in our Declaration of Independence: “All men are created equal.”  These are the words of Thomas Jefferson, a slaveholder who by no means lived up to the majesty of his claim. But the light of those words continues to illumine the great nation they called into being, and to promote the fulfillment of their promise.

As I said, America is a work-in-progress.  It is a great idea; a matrix of great ideas, some of which flow directly from the mind and heart of God.  Among these are principles of welcome, of hospitality, of generosity, of liberty, equality and justice, of truth that heals and blesses and leads, of honesty, integrity and gratitude.   These ideas define us as Christians and also as Americans. What a blessing, what a privilege to join our voices today with our own ancestors, our children and our children’s children in calling for God’s blessing in a song of thanks from one who began life as a Siberian Jewish refugee and became a great American.   God bless America. Let us sing it now.

Please stand as you are able.