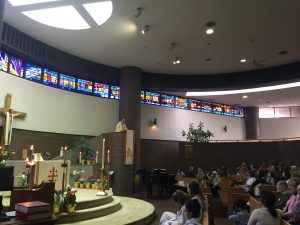 The weird calendar this year, with Ash Wednesday on Valentines Day, Good Friday on Passover, and Easter on April Fools Day … as a preacher I just haven’t been able to get it out of my mind.  And while I managed to shoehorn Valentines Day into my Ash Wednesday sermon, and Passover actually opened up Good Friday in a whole new way for me, it hasn’t been so easy with April Fools’ Day and the Resurrection of Jesus.   Now the resurrection is a joyful thing and Easter is, therefore, a day to laugh and play. But the resurrection is no joke. As the prophet David Byrne says, “This ain’t no party; this ain’t no disco; this ain’t no foolin’ around.”

I know that there are many people in the world today who think so, however, who think the Christian faith is a big joke, an elaborate hoax, fake news.  Even some who call themselves Christians think that, by believing that Christ actually rose from the dead, Christians down the centuries have fallen for some epic April Fools’ prank.   And, frankly, even today, as we read in Mark’s gospel the story of the women who came to the tomb, that’s really not so hard to understand. April Fools’ Day is about messing with people’s expectations, like putting broccoli instead of candy in the kid’s Easter eggs (one of the suggestions I found on Google).  And the resurrection of Jesus certainly messes with our expectations. The women at the tomb – Mary Magdalene, Mary the mother of James, and Salome – had their expectations messed with big time. They were expecting the tomb to be sealed; it was wide open. They were expecting to find the dead, broken, mutilated body of Jesus; instead a strange young man in a white outfit was there to tell them that Jesus had been raised, was already out the door and would see them later.   (What?) They expected death; but there was no death there. They were expecting the broccoli; no wonder they were terrified and amazed when they were offered candy. So even though the strange young man in the white outfit told them to announce to the disciples Jesus’ resurrection from the dead, they couldn’t believe it, they were seized with fear; they went away and said nothing to anyone. It was just too weird; it had to be that somebody was messing with them.

Eventually the news about Jesus’ resurrection got out, though, and those who believed it had all their expectations completely transformed.  Transforming our expectations – about everything, our lives, our future – is what Easter is all about.

I have a really sweet example of that, a kind of April Fools’ prank that offers a little taste of the kind of thing God is up to.

Most of you know, I’m sure, that we have a new interim bishop here in New York, the Rev. Don McCoid, who, as it happens, was my bishop in Pennsylvania where I served my first call.  Bishop McCoid is a terrific guy, and when he retired after many years of service, the people of the Southwestern Pennsylvania Synod gave him a big sendoff, a banquet with music and speeches and plenty of fun.   The high point of the evening came when the president of the synod stood up to present him with his going-away gift. He handed the bishop a little box that turned out to contain two Cross pens (pens for writing, that is; Cross is a high-end brand).   They were nice pens; they cost maybe $100 or so. And everybody was watching closely for his reaction; being the imperturbably nice guy that he is, Don had to stand up and choke out his thanks, even though after having poured his life into the synod for so many years he of course had to be expecting something a little more … significant ….

They didn’t let him twist in the wind for very long.  The pens were the broccoli in the Easter egg. Soon the real present came out: a new car.  (Actually, at this distance of time, I can’t remember if it was a new car, or enough money to buy a new car, but it’s the same deal)  They were messing with his expectations. Instead of broccoli he got an avalanche of candy, which, like the candy you put in the kids Easter eggs, is really just a sign of love.

Dear people, Easter is a day that God messes with our expectations.  We expect – for instance – that money and power and sex will make us happy, and that if we don’t get enough of it we’re sunk.  We expect to die and be dead. We expect the broccoli.

For that matter, we expect that when we nail somebody to a board and hang them up to suffocate in their own blood that before too long they will be well and truly dead.  Well, April fool! God is messing with us. Christ is risen! Death is dead. Hell is empty. What?

I’m sure you can imagine that in my line of work, I see a lot of suffering.  I sit with people who are suffering with sickness, struggling with the challenges of old age, coping with the loss of their most precious loved ones, facing down impending death.  I would never say to any of them, it’s all a joke, a mistake, a prank. I have my own suffering, my own struggles, my own losses. I know how it all feels. The pastor doesn’t get a pass … Jesus himself didn’t get a pass.  Who among us will suffer the way Jesus suffered? No, I would never say, never imply, that it was all a prank, a hoax, fake news …

Except … you know what … it kind of is.  Easter is like that: an impossible surprise, for us as it was for the women at the tomb long ago who couldn’t bring themselves to believe it, much less talk about it.  Easter turns everything upside down: instead of the death we expected we find radiant, abundant life. Instead of sorrow and sadness, suddenly we are surprised by joy. Instead of pain there is perfect freedom.  The pen becomes a car. The broccoli turns into a Snickers bar. Can you see where this is going?

That great American saint, Yogi Barra (who I think someone told me had something to do with baseball) famously quipped, “It’s not over ‘til it’s over.”  And of course he’s right in a way: our lives here, our struggles, our troubles are not over yet. But another famous phrase brings us closer to the truth, “it’s all over but the shouting.”   Christ has won this game and Christians know it; we’re just running out the clock. As another great saint, John Chrysostom puts it: Christ is risen and the demons are fallen. Christ is risen and life triumphs.  Christ is risen and not one dead remains in the grave. To him be glory and power and dominion, now and unto ages of ages.

It may not be quite over yet, but it’s still something we can shout about.  Please stand as you are able.

(He is risen indeed.  Alleluia)