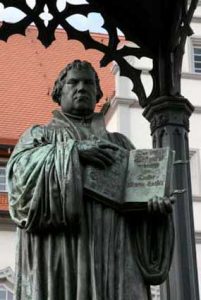 by Doris Tegge –
In Sunday School we have spent most of October studying about Martin Luther. The story of the Protestant Reformation is a good one, but how is something that happened 500 years ago relevant to young people? The truth is that human nature and the world being what it is, there will always be a need for reformers. Another way of looking at this is “course correction”. Something that may have been initiated with the best of intentions goes off course and needs an adjustment to stay on target. So, I put together a list of lessons learned from Martin Luther that can be applied in our times, and for anyone at any age.

1. Pay attention to your community. Martin Luther was a friar and professor of Biblical studies busy in the cloister studying scriptures. He could have kept his head down in his books. However, when he was made aware that Johann Tetzel was hawking indulgences in the nearby towns, he paid attention. Something did not seem right here and Luther investigated further. Is there something that is happening in your neighborhood, your school, your workplace that is not right?
2. Do your homework. Martin Luther had advanced degrees in theology and studied the Bible diligently. He was also familiar with the doctrines and practices of the Roman Catholic Church at his time. Through careful examination of church practices and comparisons with what he read in the Bible, he formulated and wrote down the 95 theses. To have influence, you need to have your facts straight.
3. Make good use of social media. Luther posted his theses in a public place so that they could be seen by all who passed by (provided you could read Latin). The cutting-edge technology of the time, the printing press, allowed his writings to be distributed quickly throughout Germany. In addition, Martin Luther translated the New Testament into German so that the common people could read it for themselves. Present your ideas in a manner that can be understood by a wide audience.
4. Know what you believe in. Luther would not have been effective if he himself was not 100% convicted of his position. Luther said at the Diet of Worms, “I am conquered by the Holy Scriptures quoted by me, and my conscience is bound in the word of God: I can not and will not recant any thing, since it is unsafe and dangerous to do anything against the conscience.” (History of the Christian Church, vol. VII, ch. 3, sec. 55) You must know where you stand, and what your faith is based on. For Luther it was salvation by Jesus Christ.
5. Be prepared for setbacks, but don’t give up. Because his life was in danger as an outlaw, Luther had to hide out in Wartburg Castle for almost a year. He had to disguise his identity and live cut off from society. Some people thought he was dead However, he used this time wisely to translate the New Testament into German. Perseverance is key.
6. Pray. Luther prayed often: ‘If I fail to spend two hours in prayer each morning, the devil gets the victory through the day. I have so much business I cannot get on without spending three hours daily in prayer.’ Being a reformer is not a go-it-alone job. The Bible tells us that God is faithful, and great reformers like Martin Luther and Martin Luther King, Jr. know this from experience. “This is the confidence we have in approaching God: that if we ask anything according to his will, he hears us.” – 1 John 5:14