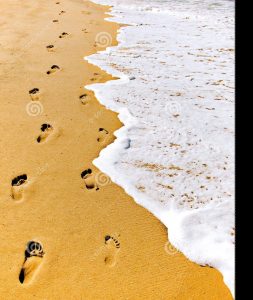 Trust in the Lord with all of your heart and lean not on your own understanding; in all your ways submit to Him, and He will make your path straight.   Proverbs 3:5-6

These are great words to live by. Trusting that God sees the whole picture while I only see part is something we all have the privilege to do. A Savior who died so that we can have eternal life with Him certainly cares for what happens to us in this life. So we should trust God in all things, but how?

August was a month of great uncertainty for me.

My company has been going through some significant changes which I was told would benefit me, but after more than two decades in corporate America I’ve learned to view big changes with suspicion.

I was most nervous because we were getting a New York based HR Director who was coming in to save the day. The news was presented as a good thing because it meant that I would have a boss who was actually in the New York office rather than several thousand miles and five time zones away. As beneficial as the change could be, it was beyond scary. What if this new Director decided the best way to fix the company and HR department was to remove the Recruiting Director? (That would be me.)

Besides the challenges at work we had Ken’s total knee replacement to look forward to on August 24. Sure, we had a great orthopedist at Hospital for Special Surgery, but there’s always going to be uncertainty with major surgery. It didn’t help that seven years earlier Ken’s father had complications from a knee replacement surgery that ultimately led to his death.

So, August was a stressful month for us. In spite of all that,  I felt an overwhelming sense of peace because I turned all of my stress, fear and uncertainty over to Christ.

When Pastor Braithwaite visited in August she preached a sermon about Jesus walking on the water and how Peter did fine when he stepped out of the boat when he kept his eyes on Jesus. As soon as he started looking at the churning seas around him, he began to sink. That’s an important lesson I took to heart throughout the month.

Any time I began I worry about what might happen at work I turned my focus on Jesus.  I was reminded that before I joined my current company I prayed that God would lead me to where I belonged. He was in control, and all I had to do was to trust Him and continue to do my best everyday.

I prayed for Ken throughout the month and asked many friends to do the same. We prayed not only for a successful surgery and quick recovery; we also prayed Ken would come to a deeper love for God through everything that happened. I personally believe that the greatest miracle that month is that Ken prayed with me each night during the week leading up to his operation.

August was a stressful month, but I was also a great month because I turned all my fears over to God. Any time I felt my heart race when I saw the scary waves and strong winds I turned my thoughts to Christ, and I got my calm back.

Everything turned out just fine, better than fine in fact.

The new HR Director who joined my company in the beginning of August assessed our operations and resigned shortly after Labor Day, but not before making some helpful recommendations. The most notable observation was that I am completely overworked and understaffed. In an unexpected turn of events my company is now hiring two junior level people to assist the department.

More important is that Ken’s surgery was an amazing success. His surgery happened four weeks from the day I’m writing this. He’s doing beautifully in PT and has started to get around without a cane.

God is good all the time, and we can trust Him in the midst of everything. The same God that knows when a sparrow falls from a tree will certainly care for His children.

Thanks be to God!